It has been a while  without writting and there is much to write about this past month that I had been running  across Spain  with over  20  concerts since the  past June 6th, where I did have the honor to escort the Phoenix Boys Choir throughout Spain and Portugal and when time permits, I  want to  keep on writting about this experience.

Not in purpose two old friends connected with me for touring back in Spain and Portugal. One  was Georg Stangelberger, conductor of  Phoenix Boys Choir for over 10 years,  austrian musician, who conducted first the Vienna Boys Choir and who came to my  office  in Madrid about 15 years back when we did the first choral tour in Spain.

The other viejo amigo is  Yair Samet, who also met  at first in  Spain  twice about 10 years ago when he came  with his orchestra the SJYS and  with Jon Nakamatsu on  tour. Two years ago and through our common friend James Smith ( Encore Performance Tours ) we met again, this time around a wonderful dinning in San Jose, and  sharing some wines we started talking about a new concert tour  to Spain. This was almost yesterday and  today they are almost ending this tour..

The San Jose Youth Orchestra came on tour with a selected orchestra  of the best musicians. They were  96  talented musicians  who worked very hard and with lots  of enthusiasm and profesionalism on each of the venues.

Yair Samet chose an excellent program,  tha includes Chabrier´s España; Lalo´s  Symphonie Espagnole, where  Max Zorin on violin and as soloitst made all audiences feel the beauty of its instrument when it was the only  sound one could here in a small square where 1000 people were in respectfull silence.

The San Jose Youth Orchestra arrived last week into Lisbon and the first concert was in Setubal, the third  city  of Portugal, where they performed their first concert last Friday in front of +400  people and where  I had the chance to meet with them again.

After some sightseeings in Lisbon  they drove to Seville and Puerto de Santa Maria where they performed their second concert, also indoor one in front of a full house, where  the enthusiastic audience clapped  with  flamenco rhytms at the end. Puero  Santa Maria is one of he most pintoresque cities and  oldest cities in Europe, located in front of Cadiz, across its Bay, similar as San Jose, facing the Atlantic, was the gateway  with  America and  the place where the ships to America departed. Was also the place where  Columbus lived before his first  trip for over  2 years, aand the place  where Juan de la Cosa draw the first map  hat America appeared around 1500´s.

But do not wantvto write much about  where they stayed and  what they visited. My purpose is to write about the concerts they did, about  how they connected with the audiences wherever they played, about the  passion that Yair  tarnsmits to all his musicians while he is on stage conducting, the passion that all audiences can feel from the front  that keep them tied to their seats till the end.

Yesterday  was Granada festival concert, the first time the SJYS performed outdoor. I knew that Yair  was not much comfortable with this type of concerts and venues . The  instruments arrived and also the musicians  and we waited almost it become dark, at 10 pm when the concert started.
It was almost850 people  seated and around the  artificial stage and  the magic arrived very early, as soon as the first chords were played. 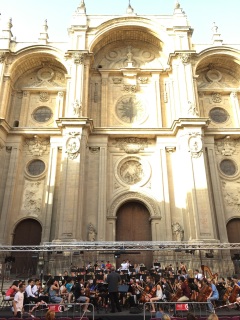 It was  after 10 pm and over 32  celsius degrees,  terribly hot, with an unusual  heat storm coming from  Africa,  probably from the Sahara, so temperatures where high. Also  it was no sense to  make an intermission so we reduced it to few minutes, but before Max Zorin  came with his violin and played togeher with the orchestra the Symphonie Espagnol by Lalo. One could not imagine that the silence  could exist in a  square with  over +1000 people at that time and were  we could easily listen to his violin from any corner of the square as clear as in  the best world acoustic venue.
I always say that stone  that the  cathedral builders used  is the best for acosutics. The main facade of the Granada Cathdral was also acting as an acoustic shell  keeping the sound for us.

The concert went up tomidnight and Yair came back three /four times with  some encores and everyone  enjoyed  the concert  so much that everyone was standing up and  clapping as the magig of music  was floating on the air !!

The orchestra left Granada behind the day after and drove towards the Mediterranean and Valencia, their next stop, while I  returned back to Madrid, still with  lots of work behind the curtains for the two coming concerts.

Thursday July 2
Never thought that  the  AVE Bullet train was so fast as it took me almost like  a subway ride in Madrid to get to Valencia. Went to Palau  to check all was in order to  receive the SJYO while the  orchestra members where at the beach. Met them  for setting up the stage and soundchecking.
We opened  doors an hour before the concert and people started coming. It was hot outside, also another youth orchestra from California played there  two  days back. Aslo tonight was the opening of the Jazz Festival at the gardens of Palau de la Musica, and   a local youth orchestra was playing  at 10  in a  youth orchestra festival not far away from Palau.
But the  friends support, the hard work and the faith for this concert was still high. I always  think that Madonna always appears, as we commonly say in Spain. The  Iturbi hall capacity  has almost 2000 seats in the  two floors, and  we finally filed up the half  of it.
According to the period of the year we are, when the  theatre indoor season is  over and to  all other circumstances , I felt after  the concert as if we all played at the  Maracana  Stadium  in Brazil or at the Bullring in Madrid for first time and they opened the  Big Gate.
The audience enjoyed  the concert very much and standed up three times while  the orchestra plaued three  encores at the end. 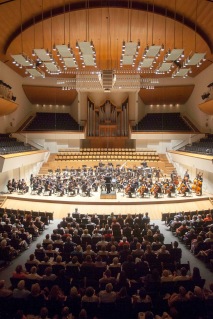 Friday July  3rd
Back home and ready for the last  concert of this season tomorrow in Segovia,  on top of the  city and its Roman Acqueduct, on  the  Knights Quarter and  behind the Romanesque church of Saint John, where today are located the Gardens of Zuloaga, a   Spanish artist who lived and worked there.
Tomorrow we will also have  some competitors as  Segovia is one of the most active  cities in terms  of culture, street musicians and festivals, almost all year round. It is also a gastronomy paradise, so  many people from Madrid  will come to  enjoy the festival.
The festival is called Noche de Luna Llena, that means   Full Moon Night and there  will be about 40 different bands/ emsebles  playing , but SJYS will  be the only one who  will perfrom classical music in a lovely garden in the quiet part of this medieval city. 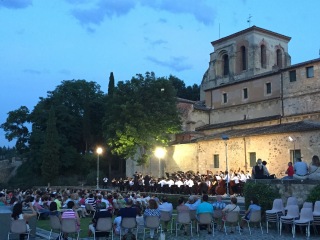 It can not  be a better place to end this tour that an outdooor concert in Segovia.
Want to thank to all the people and friend envolved on  this tour, especially to Yair Samet and  James Smith. Thanks too to Susana Sassi and Ian Tucker from Encore Performance Tours, good friends and  tour leaders of this large group ; to my friend Luis in  Setubal, Antonio, Vicente and Eva in  Puerto de Santa Maria; Ana , Jacinto, Antonio and  Alfonso in Granada,  Toni, Mari Carmen and all the staff at the Palau and   Teresa in Segovia. Thanks also  my wife Kitty who  was always behind the stage.

Willing the SJYS , safe travels and waiting for  the coming weeks to enjoy some  of the summertime in Madrid while working ,seeing some  good concerts coming too: Dylan, Jackson Browne , Dire Straits Experience ,…. at the Madgarden festival in Madrid,….. I am afraid  I wont miss any !