Since 1995 we had been providing custom performance tours  and choral festivals in Spain for  international  choral groups.

We offer all the travel and artistic organization you may need for your concert tour .

Every  season we arrange an average of 80 concerts for choral enembles through Spain and Portugal.   The concert seson in Spain is during the  whole year but   the best period is from  March  until July and from October until December.

There are  some  sacred music festivals during Easter with  whom we collaborate and also during summer time. Spain has a large tradition in choral music since the time of  Tomas Luis de Victoria.  As a Roman Catholic country we do have amazing cathedrals and  churches from the Romanesque to the Baroque periods all over the country. Audiences in Spain are very warm and friendly and we work  hard to get the  best possible experiences for  foreign choirs coming on tour.

Contact us any time! We will love to hear from you and your interest any time ! 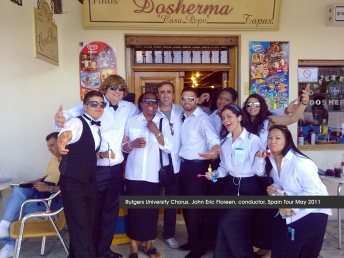 “Working with Josu Camacho and  Perform in Spain Tours was truly a wonderful experience. We were able to give concerts in the most spectacular venues of Spain and Portugal and in front of full audiences. Josu was a wonderful and professional tour guide giving us lots of historical background on the areas we visited. The sightseeing was very well organized and the hotels were well selected and met all of our needs. We also had wonderful exchanges with choirs and audiences throughout the trip.  I look forward to touring Spain again with my choir”